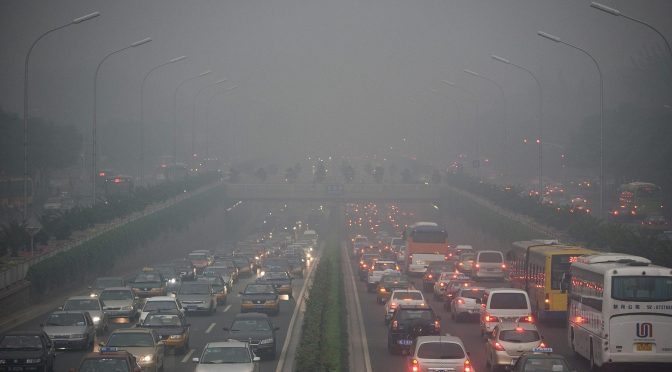 Today the diesel summit in berlin takes place. The german flagship industry is under pressure. The EU Commission has already been active mainly on the basis of European environmental law and, among other things, has opened infringement proceedings against Germany and four other Member States to ensure that air quality standards in Europe are complied with. Driving bans for cars with diesel engines in large German cities starting in 2018 are likely.

The future of diesel technology is at stake. In California, on the other hand, Tesla has started to produce the first mass model of a car with electric engine. If not re-steered, Germany’s automotive industry is threatening the same fate as German solar industry. This would also have serious consequences for German climate protection.

The scandal with combustion engine emissions and cartel accusations are currently shattering the German automotive industry. Today, politics and business meet at the Diesel Summit in Berlin. The „National Forum Diesel“, which is attended by the representatives of the federal government, several countries and the automobile sector, is concerned with vehicle retrofits to reduce nitrogen oxide emissions in order to improve air quality in German cities. If not successful in turning the paper driving bans in large cities starting 2018 will be the likely consequence. Consumers expect a clear signal from industry that the car industry no longer wants to deceive people and annunces a change of course.

It is all about the restoration of consumer confidence

It is unacceptable to customers that cars with Euro 6 emit more nitrogen oxides than vehicles with Euro 1. Consumers demand clean vehicles and solutions that do not inflict additional costs or massive losses of the value of their diesel cars. However, the restoration of consumer confidence must go even further. With silent toleration of the policy, the difference between exhaust gas values ​​according to the manufacturer’s data and the real consumption values ​​has become larger and larger in recent years. In the past, the real CO2 values ​​measured in traffic were about ten percent higher than the values ​​on the test bench. Today it is 40, and even 50 percent more. This damages the climate and costs the car drivers a lot of money because the fuel consumption is much higher than indicated.

To demonize diesel technology is not a solution

A look at the German car registration statistics shows that a general demonization and a timely departure from diesel technology are illusory. Almost 50 percent of cars registered in recent years in Germany are diesel vehicles. A change to gasoline engines would drive the CO2 emissions by the resulting higher consumption of fuel. As a consequence the transport sector would be even further removed from the saving goals fixed in the German climate protection plan than it already is. Vehicles with an electric drive are currently still a niche for (rich) enthusiasts . Neither the loading infrastructure nor the availability of suitable vehicles is sufficient to allow a changeover in Germany with its record amount of commuters. To learn from Tesla is to develop future driving technologies with more emphasis than to sell conventional drives in parallel as long as the prerequisites are not fulfilled.

So diesel technology – at least for the time being – must be saved. However, it is not done with a new software for engine control. Only a part of the affected cars is suitable for this purpose at all. For Euro 5 vehicles, NOx emissions could be reduced by up to 25%. This would not be sufficient for environmental protection purposes in the cities since this would only bring about a reduction of NOx emissions ​​of nine percent. The legal limits would continue to be significantly exceeded.

If the automotive industry wants to overcome the loss of consumer confidence, it will have to retrofit its diesel vehicles with new catalysts. Even if this costs around 1.500 euros per vehicle. The corporations have supplied products that are not legal in nature and do not work with exhaust gas cleaning. Anyone who has purchased such a product has the right to have his product reworked or to receive full reimbursement of the purchase price if reworking does not lead to success. Non-retrofittable diesel vehicles should be taken back and scrapped by the car industry  as practiced in USA by VW. With a profit of around 30 billion euros the German car manufacturers have gained in 2016 these unique conversion and scraping costs are bearable.

This would enable the automotive industry to demonstrate the ability to build clean diesel engines that meet the exhaust gas requirements. Technically it is already possible to build very clean and more climate friendly gasoline and diesel engines. With conventional technology values ​​of around 60 grams of CO2 per kilometer can be reached, measured in real road operation. The average of the new cars is now 150.

Climate change and the transport sector

However, the change of course in the automotive industry must be seen in a broader focus. As mobility providers they must create solutions that are designed for people and the environment, not for cars. This is not feasible without the developing public transport and promotion of alternative living and mobility concepts. Examples of how to do it better can be seen in Copenhagen and Straßbourg.